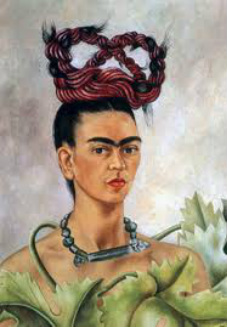 Frida Kahlo (1907-1954) was born on July 6, 1907, in Mexico.  She is considered one of Mexico's greatest artists and is best known for her self-portraits. During her younger years she had no intention to become an artist. When Kahlo was just 18 years old, she suffered a tragic bus accident, while recovering from over 30 procedures, she then began to paint. The "pain and passion" and the intensity were key features of her work. Before her bus accident, Kahlo dreamed of becoming a doctor and enrolled in Escuela National Preparatoria school, one of Mexico's leading schools. Kahlo was very intelligent, at the age of 16 she knew how to speak Spanish, English, and German. Then in her senior year of school, Kahlo and her boyfriend, at the time, boarded a bus that would eventually be hit by a trolley car. After her accident and during those procedures, she began to take painting seriously. In September of 1926, Kahlo completed her first self-portrait.
At the age of 22, Kahlo married Diego Rivera, a famous Mexican muralist. During Kahlo's lifetime, she created around 200 paintings, drawings, and sketches that reflected her life. Her relationship with Rivera was full of turmoil. She once stated that, "She had suffered two injuries; the bus accident and the emotional abuse during her marriage." Their relationship survived infidelities, the pressures of careers, Frida's bisexual affairs, and poor health.  Out of the 200 pieces of artwork, 143 of them were paintings, and 55 of them were self-portraits. When asked why she painted self-portraits, Kahlo replied with, "Because I am so often alone....because I am the subject I know best."
Frida Kahlo died at the age of 47 due to lung failure. Although she died very young, she was still able to attend her solo art exhibition that was held at the Galería de Arte Contemporáneo, Mexico. After her death, her artwork became more popular amongst art collectors. Today she is admired as a feminist icon who endured a very short, troubling life. Her artwork today sells for more money than any other female artists around the world. Her legacy will live on forever.
Powered by